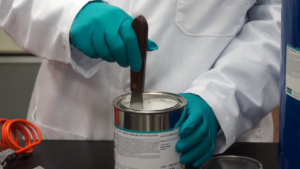 As an official distributor of Dow Corning Silicone Products, Ellsworth Adhesives Europe is pleased to announce that it is now taking orders for Dow Corning CI-2001, a white reflective coating from the manufacturer’s Lighting Solutions range.

Dow Corning CI-2001 is a new product on the European market and has been designed especially for the LED Manufacturing sector. CI-2001 differs from standard conformal coatings in that it is highly reflective – a property that will enhance light output and efficiency in lighting applications such as light reflectors, mixing chambers, backlight units, light engine units, printed circuit boards and aluminium surfaces used in the assembly of LED lamps and luminaires.

In addition to its reflective characteristics, Dow Corning CI-2001 can be considered as a truly flexible product thanks to its adjustable viscosity. Using an o-zone safe dilutent, CI-2001 end users can alter the products viscosity to suit the requirements of their coating method. Dow Corning CI-2001 is also versatile in the sense that it can adhere to most common electronic substrates, including aluminium, steel, polycarbonate and methacrylate.

Dow Corning CI-2001 is a UL 94V0 approved product and is available to order immediately from Ellsworth Adhesives Europe. To make an enquiry, please email infoeurope@ellsworth.com.

ARE YOU IN THE RIGHT PLACE?

English - Outside Of UK