Automated vs Manual Dispensing Equipment: Which is Best For You?

Once a two-component adhesive has been identified as the solution to an application, the next step is to evaluate the most suitable method of dispensing it, taking into consideration factors such as cost, accuracy, efficiency, productivity and the elimination of waste.

In this month’s blog post we examine the differences between automated and manual meter, mixing and dispensing equipment and which applications they are best suited to.

Manufacturers are seeking ever more robust and cost-effective solutions when facing challenges in bonding, potting, and form-in-place gaskets. As a result, two-part fluids are increasingly being specified to provide higher quality, consistency and endurance.

The requirement for quality and performance during the working life of a product extends not only to durable goods, but also to consumer products that have a life expectancy of just a few years —and where competition is fierce. As a result, multiple compound fluids that can provide superior controlled performance are being selected by many industrial sectors.

The diversity of industrial activity requires a similarly broad range of automation options. For example an automated meter/mix solution will consider the necessary output and fluid characteristics and dispensing the final mixed fluid will take into account positioning accuracy, flow rate, volume consistency, repeatability and the appropriate safety precautions.

As a rule, two-part fluids require an automated process whenever possible. Due to their nature, this type of material must be carefully mixed following the manufacturer’s recommendations – any deviation will result in probable catastrophic failure or degradation of the product’s integrity and performance over its intended life. If an automated solution is considered too costly, or its relevancy is in question, the manual meter/mix of the fluid is no less critical than the conditions applied with an automated system.

At a minimum, low-volume manual mixing of fluids should be limited to prefilled and separated cartridges or burst-bag kits that can adequately mix the fluid components. Two-part cartridges are preferred, as they use an internal mixing rod and blending head that thoroughly mix the two components in the correct ratio. The mixed fluid can be dispensed directly from the cartridge using a manual gun or a time-shot dispensing system.

Burst-bag kits separating the two fluid components require a careful manual mixing process, and any instructions that are provided with the kit should be strictly followed. Once the two components are mixed, the fluid is poured into a cartridge or syringe, and dispensed using a time-shot dispense system. This is a less favourable method than using a cartridge kit, as air can be introduced in the pouring process.

Bench-mounted meter/mix/dispense stations such as the DP200-1 and the DP400-1 from Fisnar, provide a solution for automating low to moderate volume dispensing. These machines are viable alternatives to fully-automatic bulk metering and mix systems, providing the fluid components are available in a dual cartridge. The cartridge package is inserted into a dual-cylinder pneumatic ram, which is mounted onto a tower to become a dispensing station and the rams are profiled to suit the ratio of the cartridge (e.g., 2:1, 4:1, etc.). Final mixing is then performed by a static mixer. The system is usually foot-pedal controlled, but control options include a digital shot timer, air logic and pinch-tube valve installation. Dual cartridges of 200 ml and 400 ml can also be accommodated.

Low-volume applications can require highly accurate positioning and precise volume control. A common installation would involve an automated robot equipped with a valve head and static mixer fed from a metering system. In miniature semiconductor and surface-mount component processes, pre-mixed syringes are used to dispense into the confined spaces between components.

For automated, low-volume, micro-shot applications, a meter/mix system that includes cartridge reservoirs can be mounted on a robot, though the system must be installed on a machine that is capable of handling the necessary load.

A number of applications in durable goods, such as the defence and transport sectors, require sophisticated fluid conditioning and process monitoring. Metering and mixing solutions in these sectors are dictated by rigorous standards and require careful planning and custom proposals.

High-volume, two-part metering and mixing require an automated and systemized solution. The dispensing process can be manual or automatic. Consideration should be given to fluid storage, fluid delivery, and the possible installation of level alarms and sensors. The dispensing method is determined by decisions similar to those in low-volume dispensing, including positioning accuracy and volume control.

Automated production and low-cycle, high-volume dispensing requires a sufficient fluid supply that is available at all times. The appropriate fluid supply to the metering system is determined by the type of fluid containers available, container size, viscosity, and conditioning specified by the manufacturer’s technical data sheet (TDS). The fluid supply options will include direct delivery from supplier containers, gravity and pressure-assisted reservoirs, or secondary holding tanks.

Medium- to high-viscosity fluid is commonly supplied in 3kg and 20 litre pails or 200 litre drums. Extruder-pump systems are used to deliver the fluid directly to the metering pumps or to secondary holding tanks that are controlled by sensors.

Fluid conditioning processes (e.g., thermal management, environmental control, agitation and de-gassing) are possible. Low- and high-level triggers in fully automatic systems ensure an adequate supply of fluid. Low- and high-level sensors in non-automatic supply systems can signal when to change a container or refill a reservoir.

A number of two-part fluids used in automatic metering and mixing require automatic or manual flushing of the system periodically. Personnel safety and relevant procedures need to be followed when working with and discarding hazardous materials.

Depending on the fluid and the process, the conditioning and control of the fluid can extend to the metering system, hoses and mix head. Conditioning requirements are generally installed on large-scale systems and also require heavy-duty robots for automated dispensing.

A variety of metering and mixing technologies are available. They include piston-pump, gear-pump, solid rod and progressive-cavity machines, all of which provide volumetric metering with a high level of accuracy and repeatability.

Piston-pump technology is the most common and less costly solution for high-viscosity fluids requiring high pressure. However, the technology is not tolerant to fluids containing solid content, since particulate can become trapped within the seals, eventually causing damage to the integrity and performance of the machine. In a few cases, the frequent maintenance schedule required can be tolerated.

Single-acting, fixed-ratio, piston-pump machines are recommended over variable-ratio models. The reasons include, but are not limited to, prevention of contamination, ease of set-up, calibration and cost. 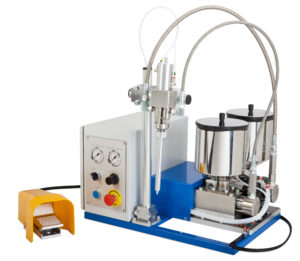 The single-acting metering principle in a piston-pump machine configures the two metering pumps for an exact ratio. Fluid is drawn into the cylinder when the pump rod retracts to its recharge position and is dispensed as the pump rod displaces the fluid. A single-acting, piston-pump machine like the Fluid Research LC50FR needs to recharge at the end of a pump cycle. This is an important consideration in automatic dispensing.

An alternative to a single-acting model is a double-acting system, which is primarily used to provide continuous metering by dual-rod, reciprocating piston pumps. Double-acting systems also reduce the frequency of recharge, thereby extending the life of the pump seals.

Progressive-cavity pump technology is an efficient solution for fluids with a high content of solids and abrasive fillers, such as silica or aluminium. The system uses a rotor/stator design to meter, mix and dispense high-viscosity fluid. They are also continuous in operation and therefore pulse free.

Low-pressure, gear-pump metering systems are widely used for low- to medium-viscosity fluids. These pumps provide pulse-free, continuous dispensing. In general, gear pumps cannot be used with fluids containing abrasive fillers. The machines operate when fluid enters the pump under pressure. As the gear rotates, fluid is sealed between the spur-mesh contacts and thereby flows around the perimeter of the gear-pump housing. In this manner, the fluid is volumetrically controlled and delivered to the dispensing valve head.

A static mixer is the most commonly used mixing method. This plastic mixer comprises an outside tube and inner mixing elements. The metered fluid is fed to a dispensing valve head with a static mixer attached. Two valves within the valve head are opened simultaneously, thereby allowing the two fluids to enter the mixer under pressure. The correct number of mixing elements is required in a static mixer to properly and efficiently mix the metered fluid. The fluid supplier should be consulted to determine the optimal static mixer for a specific application.

Another mixing method is to use a dynamic mixer, which can be described as a dispense valve head with a rotating mechanical blender. A dynamic mixer is usually only necessary when there is a wide disparity in the mix ratio. Dynamic mixing is costly and usually requires a fluid-flushing circuit. A compromise may be to use a disposable rotary static mixer that may provide more thorough mixing than obtained from a standard static mixer.

Bench-mounted fluid dispensers are an option when dispensing pre-mixed fluid from a syringe or cartridge. Two important factors need to be considered: the working life of the mixed material, and the increasing air space as the fluid level decreases within the syringe or cartridge. Both of these variables affect the accuracy of the dispensed shot. Costly compensatory and mechanical dispensers are available, but they need careful monitoring and adjustments. Valve controllers that are similar to fluid dispensers can provide a four-way, timed signal to a valve head for automatic dispensing.

Any automatic metering and mix system can be interfaced to a stand-alone, batch-production dispensing robot or integrated into an in-line conveyor facility. In an automatic dispensing application, the metering system is in a steady state of readiness to receive a signal from the robot, which carries the remote mixing valve head. The robot controls the dispense path and also controls the volume by controlling the speed. In the case of potting and encapsulation, the metering system can also control the volume, but the process is always a union between the robot and the metering machine.

Automated dispensing robots with multiple axes are available with a range of working platforms selected for the application. Most common is a three-axis machine, in either a gantry or cantilever design. Selective compliance assembly robot arms (SCARAs) can carry heavy loads and perform within a greater range of axes. These installations can be seen in large-scale industrial assembly. Smaller robots with three or four axes can handle syringes and cartridges containing pre-mixed fluids, such as pre-mixed and frozen materials.

To conclude, both automated and manual dispensing and meter mix equipment have a valuable purpose to serve and are able to meet user’s two-component dispensing requirements. However the choice of which is better, is very much down to the kind of application in question as well as the purchaser’s budget and expectations. Our technical team welcome any questions that readers may have on this subject. Simply send an email to: infoeurope@ellsworth.com.

ARE YOU IN THE RIGHT PLACE?

English - Outside Of UK